Rechargeable batteries for your IoT

I've got a lot of half used batteries from left over from recording shows (house concerts) and I've got enough sensors now that number of batteries getting tossed is becoming significant. I've tried rechargeables in the past but they did not seem to last all that long in devices, on the shelf or recharge that many times before going bad. Plus the size options were limited. There are a new options now though including smarter chargers, a lot of Li-ions that are lite and no memory issues that should make them perfect for environments where you might want to swap out batteries before they go dead without wasting them.

Here is what I've tried this time around:

Note they say these hold a charge for a long time but I fully charged them then put them in a drawer for a couple days. When I stuck them back in the charger to check them though they said about 70% Not clear if that really means 70% or how much that affects the runtime. Take the following percentage in that light though.
I put a set in my Zoom H4n Handy Portable Digital Recorder and left it to record for the day. After about 6 hours it was still going so I decided to try them in a show. With backups just in case.

Next I charged up a couple sets for a show, used one set for about 3 hours then left them for a couple week till I had time to check the battery levels.
The one from a shotgun mic said 59% when put back in the charger.
Then two from the H4n said 40%

Put a set each in a Netatmo indoor module and a wind module. The alkalines last about 6 months so may take awhile to see how these do.

These are supposed to be a bit more heavy duty than their standard AAs. Stuck a set in my Bescor Motorized Pan & Tilt and left it on automatic for about 6 hours. It was still going which was pretty impressive given I've had older, but unused, alkaline batteries be too weak to run it at all.

Between these and the other AAs I should definitely see a savings since I swap batteries every show so I don't have to worry about them dying during a show. Used for thew above show without and issue. A couple weeks after the show they said 57%.

From another shotgun mic from same show. Charger said 8.97v but then the back up that was not used said 8.98v so basically it was still fully charged. Not unexpected though as this mic I usually only swap out batteries about every half dozen shows or so and that is mainly just to be safe.

Have a few of these in Wireless Tags. The non rechargeables last 3-6 months in those so should have some data on those a bit sooner.

First freezer battery lasted only 2 weeks! Hopefully will not be the norm.

Think I need to call these a bust. Here is my battery change log for the Wireless Tags. The time where I replaced the battery with a CR2032 are purple and the times I replaced with a LIR2032 are green. Basically it comes down to a month base case and as little as a week even at room temperature. This compared with and average of about 155 days with the CR2032s.

Planning on trying these in some Z-wave sensors like the Aeon 6n1 and Homeseer motion sensor though those tend to last up to a year. Probably will try some in a Dakota Alert 3000 Wireless Vehicle Detection Probe Sensor VS125 too.

Check back for updates here and posts tagged Rechargeable stats.

For another option with Wireless Tags I found this. But the also have a USB powered version out now.

Update: 1/25/2020 getting varying results depending on device. Here is the updated data.

Update 7/18/2020 Even more varying results depending on device. Here is the updated data. 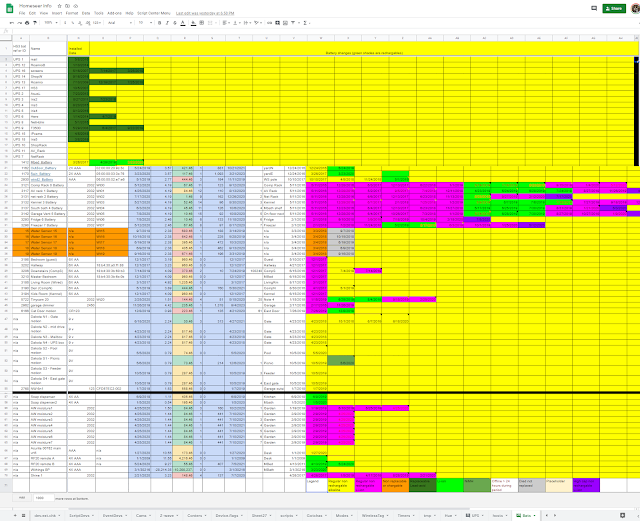 Click here for current sheet.
Posted by Avatar42 at 7:46 PM