Note to self, NEVER make changes within an hour of bed time.

Went to move my house Z-NET onto the new network as the last thing before bed. Almost 3 hours later I'm back online. 😞 Part of the problem was according the the user forum all I needed to do to update the IP was restart Homeseer. When I did that it asked to install and update which I decided to do. Unfortunately I moved my instance to a SD awhile back to improve performance (the logging was killing the drive that also was recording security cam footage) and it seems the upgrade was confused and wiped most of my install and put a new instance on the old drive. Fortunately having a paranoid bent I backup my Homeseer instance every time the server is restarted so I was able to get a list of the files still in the folder newer than my back up saved off. Then I copied the files in form the new instance and finally the saved files back in. That sorted. I think at least. But it did not find the new IP for the Z-NET. Not surprising since I'm moving from 192.168.* IPs to 10.* IPs. After a bit of file scanning I found the IP needs changed in \Program Files (x86)\HomeSeer HS3\Config\Z-Wave.ini so after changing that and a restart I'm finally back in biz. Time for bed.
Posted by Avatar42 at 10:46 PM No comments:

I went into the Alexa app to link to my Harmony since the Harmony / Homeseer link has been a bit iffy lately and OMG the stuff that has been added since I last looked! 23 PAGES of just smart home / automation type skills alone. Wireless Tag even has a skill now.  I hear Vera is planning to have a skill soon. They look to be one of the few that does not have a skill already so they better get moving.  I only have my Harmony, Nest, SmartThings (as backup Hue channel) and Homeseer devices linked up. The Wireless Tag skill is only useful for changing settings and how often do you need that? That gives me 109 devices connected to my Echo now. Note if you want to trigger Homeseer events you still need to use the IFTTT skill. One complaint though Amazon still does not seem to realize their success yet. When you go into a group to assign devices for instance, they appear to have no order to them which makes grouping a few of 109 devices a bit more of an adventure than it ought to be. I did get a group created to turn on every connected light in the house and shop so I can turn them all off or on. I already have an event setup to turn on all exterior lighting which brings the up in groups. Can't wait till dark to see what the lag time is and if they all come up at once. I also created a group called fan since it could not seem to deal with Mbed_fan as a name. Having to rethink names of some of the Harmony linked devices too so I can avoid confusion.
Posted by Avatar42 at 8:12 PM No comments:

It seems basic nested IFs are something that still alludes most home automation without programming. Funny considering the Time Commander Plus did it way back in the X10 days about 2 decades ago. Though granted some might call that interface programming. Anyway one of the reasons I wanted to start this blog was to post about how Homeseer almost does it via WYSIWYG and that requires some space and preferabley at least one picture. While Homeseer still can not do something as simple as
IF alarm armed and IF door opens OR motion detected then trigger alarm
They can fake it with
IF alarm armed and IF door opens OR IF alarm armed and IF motion detected then trigger alarm
Which looks something like this 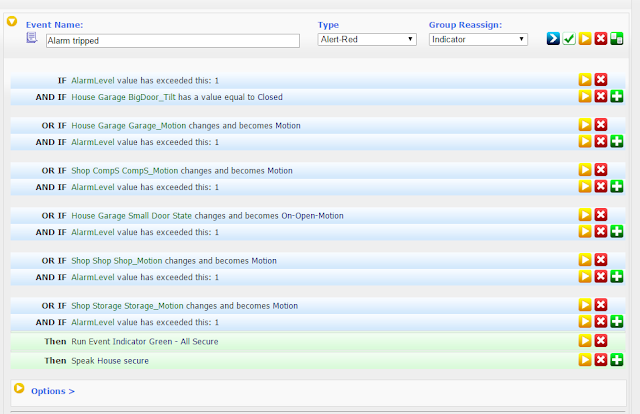 The closest you can come on most is to use a "mode" like "Away". On a Vera hub for example you would create a "Scene" that IF door opens OR IF motion detected then trigger alarm and tell it to only run in the "Away" or "Night" modes. No big deal you might say but if you are dealing with something that does not match one of the state modes (Away, Home, Night and Vacation) like for example soil moisture and rain forecasts when controlling a watering system it can get complex real quick on the systems I've tried if you are not a programmer.
Posted by Avatar42 at 2:46 PM No comments:

Yet another project blog

Probably a bit late to start this one as I'm already on my 10th plus home automation hub so this will mainly be Homeseer related stuff but since that connects to damn near everything that does not leave much behind. Plus I need a place to store tricks and tips so I can find them again later when I need them without searching Google for hints to the final solution. For a view of what I have tried over the years look at my Home Controller Compare sheet.

I'll back fill with some of my relevant Facebook postings as I have time / find them.
Posted by Avatar42 at 12:47 PM 1 comment: