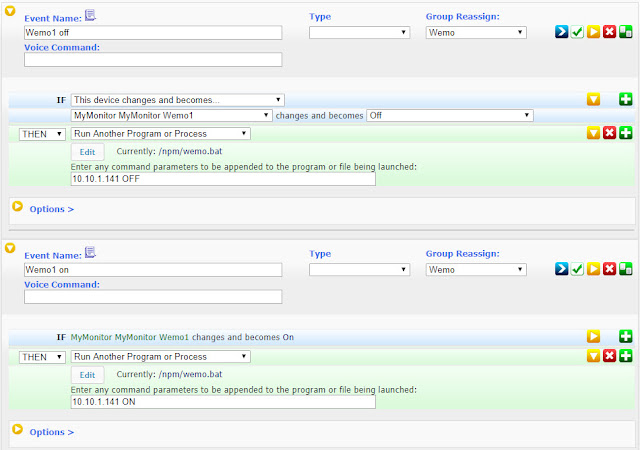 Note you could also create scripts to get state, signal strength and name info and even set the name of the plug. Though at that point reverse engineering the shell script into VB might be worth the effort.
Posted by Avatar42 at 8:09 PM No comments:

I got some of these last year as $5 addons and linked them via IFTTT similar to how I did the Sonoff switches. They have been working fine that way but I came across the article Reverse Engineering the TP-Link HS110 today which shows how to control them locally without a bridge or reflashing the firmware. I definitely sounds easily doable from a program if not a script. Someone already did a Domoticz plugin for tp-link HS100/HS110 smartplug in Python. So I'm putting creating a Homeseer version on my todo list. Assuming someone else does not do it first of course.
Posted by Avatar42 at 10:16 AM No comments:

The right / best way to control a light. It depends.

Given all the flame wars over smart bulbs vs smart switches it seems time to make a post to use in replies. One guy even suggested using both to avoid:


There really is no point in chaining smart devices and in fact is can cause issues if the smart bulb is Z-Wave or Zigbee in that these are mesh devices and removing power from them means the mesh is regularly disrupted. In the best case this causes lag and in some cases might cause devices to miss commands. Depending on the WiFi bulb it may cause connection issues as well since most of them work via a cloud interface of some sort and disconnecting them will require them to establish a new connection to that cloud to receive commands. Then there is the whole bit about updates which would only be able to install while the the light ia powered. Bottom line these devices are designed to be always on so powering them off for extended times at your own risk.

As for the "right way" to control a light. First off it would depend on the best fit for the env.
Other than a bed room:

For a bedroom or other place where you want more manual control a smart switch is used without a motion detector.

Simple right? Like most of this stuff there is not general "right answer". The best fit is on a case by case basis. Though let me repeat again always try and get devices that work with multiple hubs because it is pretty much a given at some point you will want to move to a new one. Whether is a shutdown like Resolve or Lowes' Iris or issues like SmartThings has been having or incompatibility between version of hubs like Lowes Iris' and SmartThings' V1s and V2s or you just need a feature some other hub has and your current one does not.

Note some of these are a bit one sided and a couple get into Rube Goldberg style options.

FAQ: Philips Hue and Other Smart Bulbs - What sort of light switches to use with them? (Long FAQ)
Proper way to use both a smart wall switch and smart bulb to control same ceiling light fixture (multi-part question)
5 things to consider before installing smart light switches
Smart Switches vs Smart Lights: Which is best solution?
Which is Smarter: Smart Switches or Smart Bulbs?
Smart Switch vs Smart Bulb: Which Is Best for Your Smart Home

Email ThisBlogThis!Share to TwitterShare to FacebookShare to Pinterest
Labels: Lighting

Thinking of moving to Homeseer? Things you should know

Don't get me wrong, I think Homeseer is a great solution just not for a first timer.

The interface is really aimed more at installers than end users but when you get to the point you need for instance multiple Z-wave networks it makes sense to  move to the next level with Homeseer. Before you run out and buy there are a few things to keep in mind.

I do find it odd no one has made a plugin to use a SmartThings as a ZigBee bridge for Homeseer. Seems like it should not be that hard to do. I might have to do it myself at some point. Just got about 300 things ahead of that in the queue. Especially seeing as how my SmartThings account is locked out right now due to all the recent Samsung conversion mess. The "temp" IFTTT linkages I setup way back seem to still be functioning for now. In case you didn't know many of the SmartThings sensors and devices will not work with most other hubs. Many are ZigBee based which Homeseer has only limited support for. This is why it is important to get devices with cross hub support as much as possible. Many ZigBee devices, like Hue, also have "hubs" (bridges/gateways) available that allow them to work with many brands of hubs and multiple systems at the same time. Being able to connect to multiple system not only give you multiple control paths should one fail but makes migration easier. For instance if you have Hue bulbs linked directly to a SmartThings hub you need to access them through SmartThings and moving to a new hub, even a replacement SmartThings requires pairing the bulbs all over again. Using the Hue "hub" you just link the Hue "hub" to the new one and you are done. They also tend to give you added features and might help avoid issues.

For anyone else thinking of moving to Homeseer: