I started this awhile back. Then the Dakota receivers became unavailable so I thought I'd wait till the new model came out. Unfortunately after talking to Guardline it appears that will not be happening. It sounds like there will be no compatible receiver coming. Probably no new model with multiple relay outs either though they hinted a model that talks to home automation might be in the works. So I figured I should go ahead and post this for those that want to snap 2500 up before they are gone. Guardline does make a model with 1/4 mile range and talks to 16 sensors but only 1 relay out. You are expected to memorize which tone means what of  those 16 areas was triggered.

Most Dakota 2500 receiver bundles are now going for several times the MSRP.  For example the receiver / contact sensor I used in my mailbox was just $75 a little while back. At the time I'm writing this the cheapest option is to get the underground bundle from Guardline directly for $240 and toss the sensor unless you need it and add contact sensor for $35. (While you can. Some are already trying to get over $80 per sensor.)  After a fair bit of research I'm not finding any decent replacement options as Dakota seems to have been to only one with multiple relay outs much less also supports contact sensors or talks directly to home automation. So you best option now for a mailbox sensor is to buy a 4000 bundle for each sensor you wish to install at like $90 a piece though those have no relay out. After distributors clear the last of the Dakota 2500 stock there might not be an option for awhile so I broke down and bought a "backup receiver" and several sensors. I wanted to add more sensors to the south field anyway with all the "interesting creatures" (deer, cows, wild? pigs, coyotes....) passing through there lately so finding them on video is easier. PIR motion sensors can be way more sensitive without the false alarms most video systems can give you since they see heat diffs. Of course you want both for best results.(See Paranoia definitely pays when it comes to recording.) Hopefully by the time one goes there will be better options. Or at least by the time both go. Kind of amazed there isn't one already.

Update: after ordering the above mentioned receiver / probe bundle I found the receivers on their own for just $70. The site is damn slow. I ordered yet another one at that price so I should be good and well covered. But they just cancelled the order.

Update: Dakota has release a 4000 series receiver (RE-4000 Plus) which has 2 relay outputs. It support 16 sensors each with its own chime type. It still not the one relay per sensor of the 2500 but better than 1 for all of them. And it still will not use 2500 series sensors of course.

Update: 10/17/2019 Google Buy had a receiver for sale for under $70 but that order too was cancelled after a week. I did find a 2 pack of motion detector on Amazon for $105 for spares. I setup the spare receiver I bought with 4 of the motion sensors I had bought previously and caught this guy on video trying to steal one. Makes me think I need some more monitoring the north property line as this is second time someone has come in that was and I did not get and alert quick enough to get down there before they were gone. How good are the motion sensors?

In the just weird department, the battery ran out in my first Dakota Alert DCMT-2500 Transmitter after almost a year. I stuck in a new battery and it kept tripping constantly. Even though the battery tested OK I put a newer one in and it worked fine. I'm guessing I just got a bad battery. Almost two years on now I've only needed to replace a battery in one of the motion sensors since.

Should be pretty straight forward. Just follow the instructions for setting channels on the sensors to pair the with the receiver. Wire the Ecolink sensors to the relay outs on the receiver and pair the Ecolinks with your home automation. Here is an example of how trigger Blue Iris cams when a Dakota sensor is tripped. 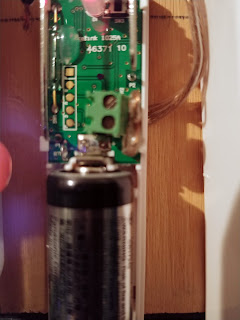 Sensor mounted inside. Running the wire inside the shell would look better and probably hold up better but there is not easy way to do it without making some good sized holes in the shell. Note a switch on each door wired in series to sensor. 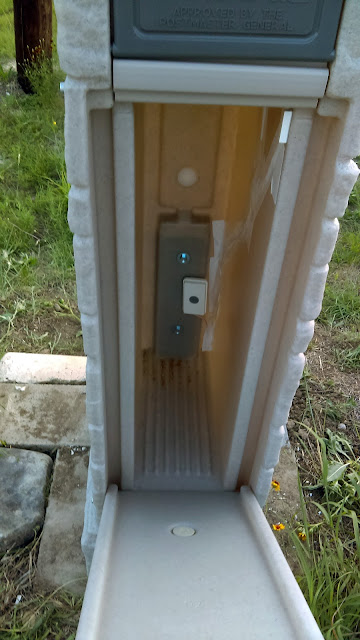 After being swiped by semi truck pulling out. 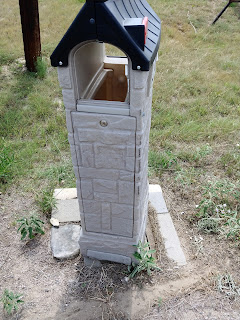 Snapped back together almost cannot tell it was hit. 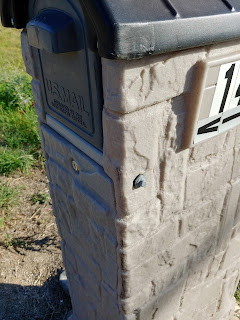 I turned it around after this (effectively moving it back close to a foot) and added a more signage for all the delivery drivers that could not figure out all mailboxes in rural areas are on one side of the street. 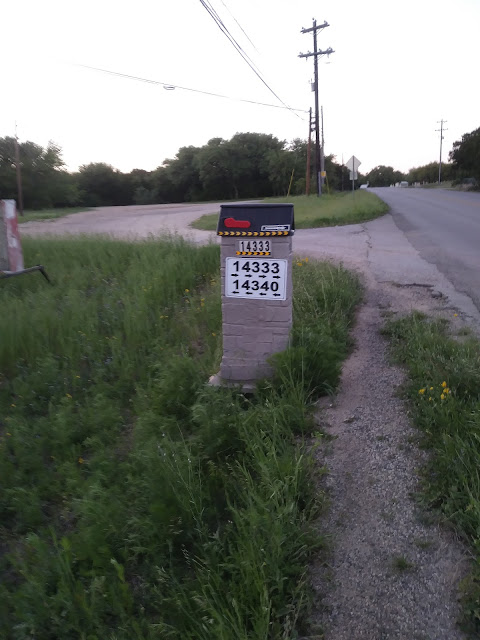 I also have a similar set up in the parcel box just inside the gate along with motion sensors to tell me if some one / thing comes through the gate and if they decide to go up the driveway to the house. 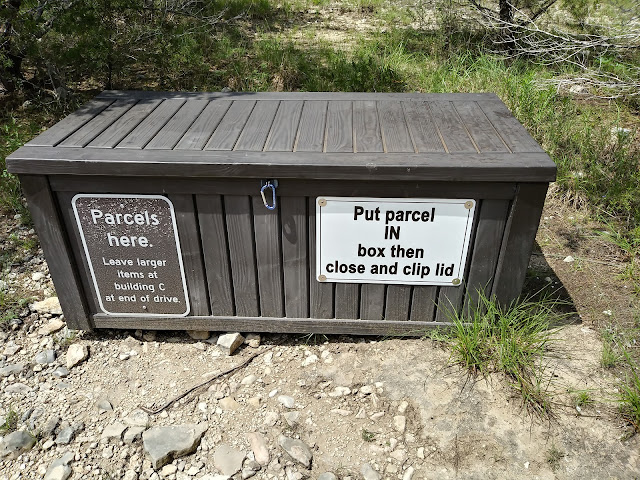 Why 2 signs? Because with just one things like this happen. 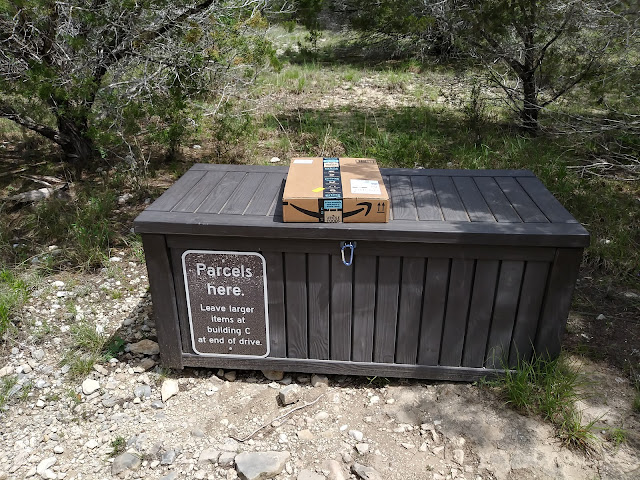 I suggest you seal the holes in the parcel box as things may nest in there. I almost grabbed the snake that left this skin behind when I reached in for a package the day before. Note the sand looking stuff is Snake-B-Gon. 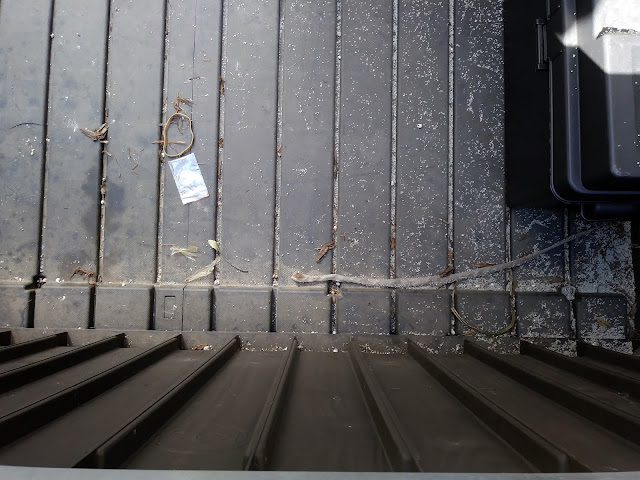 Got tired of the switches sticking so I upgraded them. I used these which had worked so well on the garage door.
Alarm Center Seco-Larm SM-226L-Q Mount Magnetic Contact, NC

I also did a cleaner job this time running the lines inside the walls instead of taping to the sides.
I removed the magnets from their mounts and glued to the doors. I added a bolt just to be safe. Note I had to  cut the door a bit to make them fit.

See how much cleaner this looks plus there is less to snag on when they deliver the mail. And screws hold it much more firmly in place that the stuck on ones I used before. 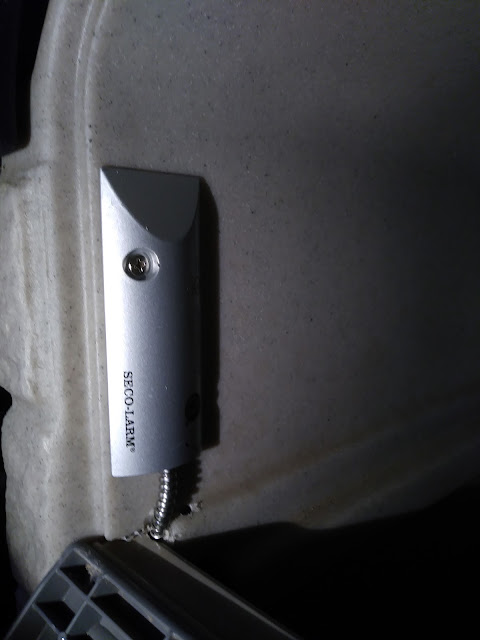 The fit does not even need to be that tight since it is made for garage doors which tend to vary over the seasons. 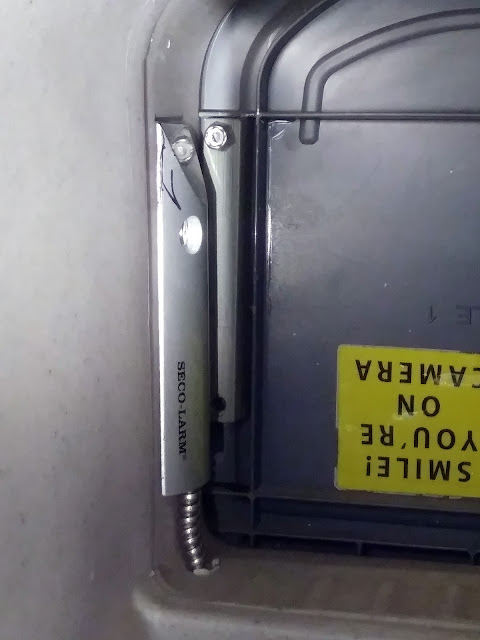 I decided to go horizontal with the transmitter this time. I would have liked to stick it the side channel but it was slightly too thick. I used mounting tape and single screw to let it have some give if hit hard by something. 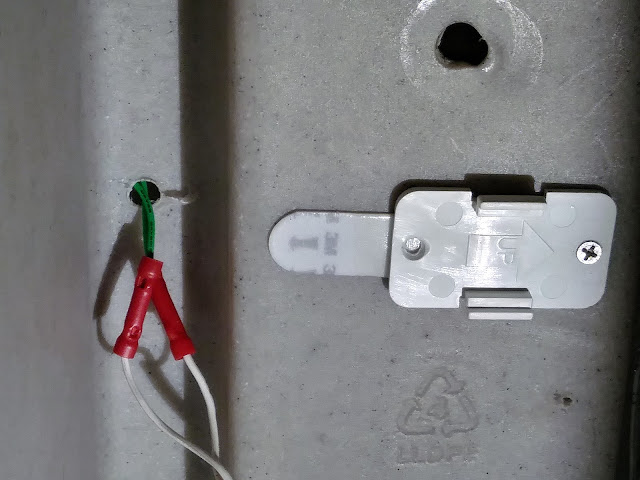 Here is what it looks like in place. Note these pics are pre mounting on the post but to mount on the post I need to remove the screw. 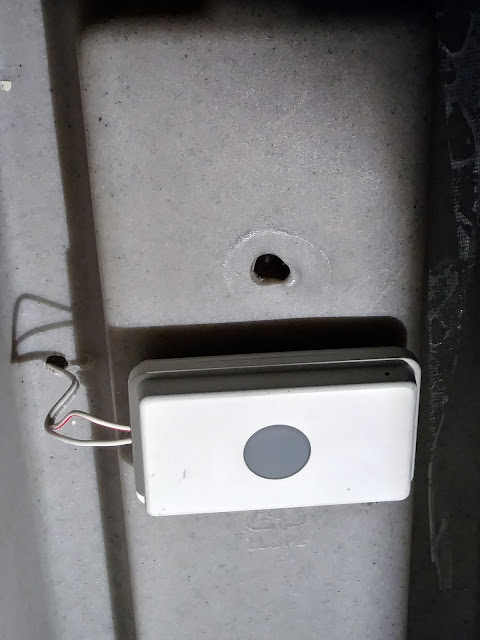 Lastly here is what the wiring looks like inside viewed from the post hole. You can see the transmitter mounting screw which will go into the post once the mailbox is on the post. 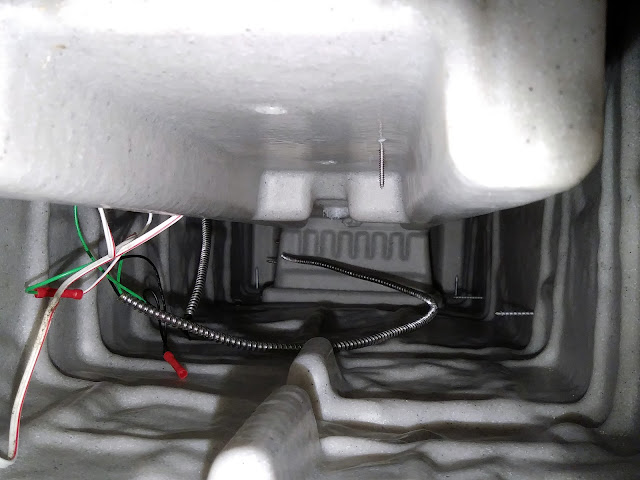 Now for the bad news. I thought I'd double check the 2 spare transmitters that did not seem to work when I tried them. Since I had the mailbox in I checked the switches matched, they did. Then tried flipping them back and forth to make sure they were in place, still nothing on either transmitter. Lastly I tried multiple batteries including the one working in the mailbox still no go. I sent off and email to support to see if they have any ideas.